Vanuatu coconut crabs are the largest and most powerful land crabs on the planet (only the Japanese spider crab is bigger – but it lives in the deep ocean!). Coconut crabs can grow up to an incredible 1m (3ft) long and weigh over 4kgs. Vanuatu is one of the last places in the world where you can still find coconut crabs in relative abundance, wandering around the outer islands, ripping whole coconuts apart with their huge, powerful claws. But that is changing rapidly as feral pests like rats are introduced and over-harvesting occurs as the result of tourism demands – so please, if you are offered coconut crab in any restaurant in Vanuatu please ensure it has been harvested sustainably before eating it! They are a remarkable animal (as you will soon find out) so do your part to stop them from going extinct! For more Vanuatu travel and food tips see here . 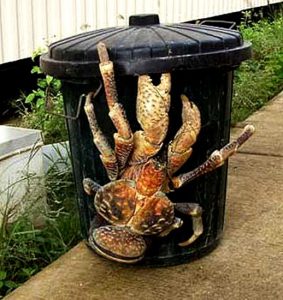 Believe it or not, Vanuatu coconut crabs start off life just like a normal hermit crab, tiny and cute with a shell on their back, but after about a year or so they undergo a remarkable transformation – they ditch their shell and their whole body hardens like Iron Man in a process known as recalcification.

Tropical fruits, dead decaying animals, other crabs and sometimes each

other – nothing is off limits to Vanuatu coconut crabs! Plus bizarrely, they have even been known to eat themselves (i.e. as coconut crabs grow, they moult their outer layer which takes about a month – they then promptly eat their own shedded exoskeleton!). Talk about being the ultimate zombie cannibals of the animal kingdom! 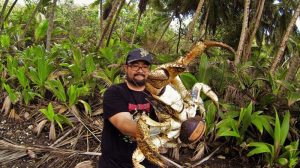 The biggest Vanuatu coconut crabs can be over 50 years old – so if they are over-harvested or if rats kill them when they’re young and vulnerable, it takes a coconut crab population almost a lifetime to recover.

4. Vanuatu coconut crabs can’t swim – but their babies can!

Vanuatu Coconut crabs sink like a stone in salt water. The only time they return to the ocean is when their babies are ready to hatch. The females release the hatchlings into the ocean waves after which the tiny, floating larvae are totally on their own. They float around in the open ocean for around a month before finally returning to land – and only a lucky few make it back! Vanuatu Post recently featured the lifecycle of the Vanuatu coconut crab on their stamps in a bid to promote the conservation of these rare creatures.
Coconut crabs Vanuatu

So how do they find their food wandering around in the pitch black when their eyesight sucks – with their incredible sense of smell! Vanuatu coconut crabs are armed with special antennae that can detect food over very large distances, and a huge section of their brain is devoted to detecting odours! 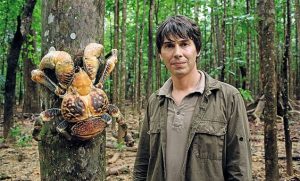 Vanuatu coconut crabs spend most of their lives hiding out in crevices or burrows with no-one but themselves for company. And if they do happen to bump into another coconut crab on their nocturnal excursions, they wave their claws at each other (in a kind of ritualised aggression) to maintain their own personal space.

7. It may take a coconut crab days to crack open a coconut.

Vanuatu coconut crabs have to first use their claws to p 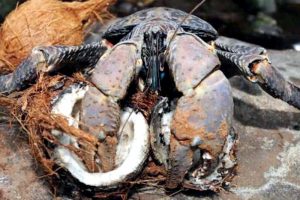 ull away the tough outer husk. Then they look for a weak spot in the inner coconut shell (usually the eye of the coconut) and stab it with their longest walking leg. Finally they use their powerful claws to rip open the nut to get to the sweet flesh inside. The reward is worth it – coconut crabs that live on a diet of coconuts grow twice as large as those that don’t!

Vanuatu coconut crabs are well known for sneaking off with cutlery, crockery, plates, pots and pans from houses and campsites. In fact, their claws can lift objects weighing as much as 28kgs. They are the kleptomaniacs of the arthropod kingdom. Apparently it’s not because of a fascination with all things shiny – rather their highly sensitive sense of smell probably detects remnants of old food on the items.

Yes, it’s official – the Vanuatu coconut crab has the strongest grip of any animal on the planet. A team of researchers in Japan measured their bite-force and figured out a giant crab could exert a bite force of around 3300Newtons – that’s the equivalent of an average human being able to grip with a force of 6 tons! They could literally crush your bones with their claws! 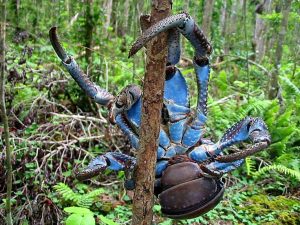 10. And finally, coconut crabs are like Smarties – they come in a variety of colours

For some unexplained reason, coconut crabs come in a variety of colours, some vibrant, some drab – from orange-red to electric blue, dark purple, brown and even yellow-blue-red. It has nothing to do with the sex of the crab or its age – in fact, no-one seem to knows why they come in so many different colours!