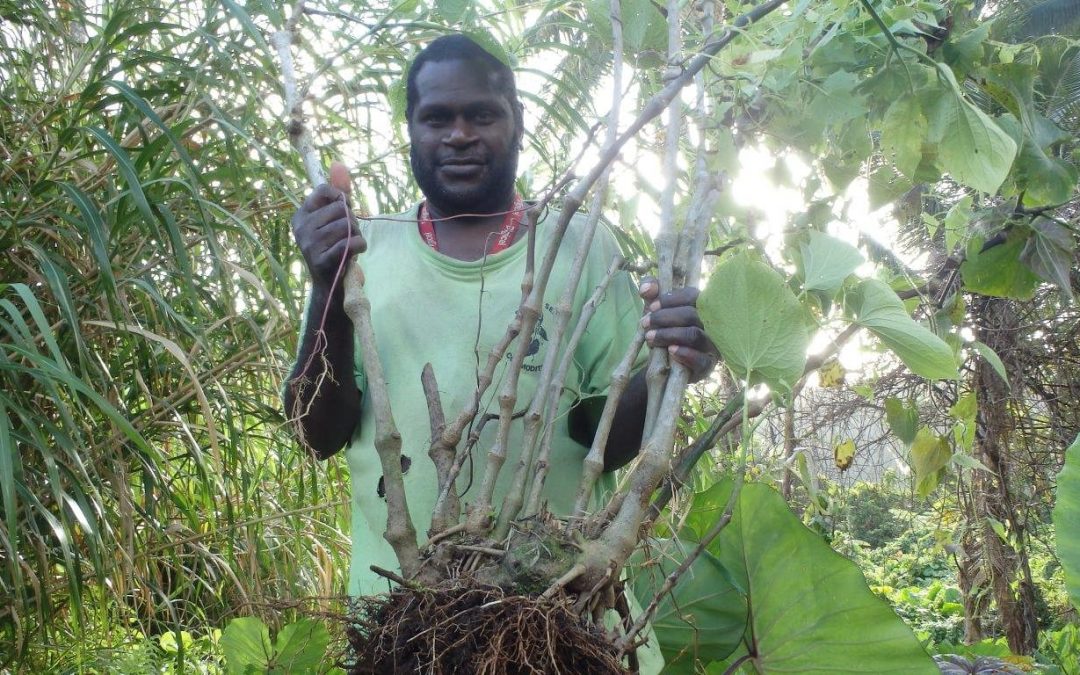 If you plan on drinking a couple of “shells” of Vanuatu kava while on holiday (it’s traditionally served in half coconut shells), then you need to read this blog.  (*Photo credit – Michael Louze) 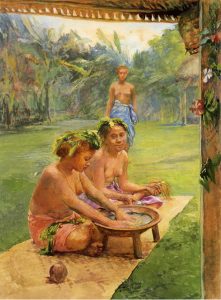 Why? Because the traditional origins of Vanuatu kava go back more than 3,000 years! It’s an integral part of Vanuatu “kastom” rituals and drinking the right kava in the right place at the right time can result in an almost spiritual experience. But drinking the wrong Vanuatu kava at the wrong time (or drinking too much of it) can not only make you feel sick and nauseous but also break taboos and insult your hosts. We’ll answer questions like:- Is kava an alcohol or a drug? What are the effects? Are women allowed to drink it? What’s the difference between an ignoble and noble variety of kava? Can it be used for medicinal purposes? Where do I find it?  How do I drink it? What does it taste like? What happens if I drink too much of it? Let’s start this journey by understanding the role kava plays in Vanuatu history and culture.

Kava is a ceremonial drink made from the root of the kava plant (Piper methysticum), a small shrub with heart shaped leaves that is a distant relative of the pepper tree family. The original settlers of Vanuatu, known as the Lapita people, are thought to have domesticated the kava plant about 3,000 years ago for medicinal and cultural purposes.

Their descendants – the Polynesians – then carried kava stem cuttings eastward into Fiji and eventually onto the rest of Polynesia (Samoa, Tonga, Tahiti, the Marquesas, Hawaii, etc). See here for more information about this amazing journey.

In other words, Vanuatu is the ancestral home of kava, which explains why Vanuatu kava is the most potent in the world and why more varieties exist here than anywhere else in the Pacific. This is why it’s important you understand a little about Vanuatu kava culture. 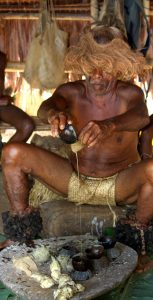 In ancient times, kava ceremonies in Vanuatu were surrounded by complicated rituals and restricted to secret societies where only powerful men could drink kava and practice sorcery (Lamont Lindstrom).

However, kava has since evolved to become part of everyday society in Vanuatu – it is offered as a welcome drink to visitors and exchanged as a gift at important gatherings like births, circumcisions, marriages, high ranking chief meetings and deaths.

And adult men will often gather at the end of the day to enjoy and share a coconut shell or two of kava simply to chill out or even to resolve neighbourly disputes!

WHAT’S THE DIFFERENCE BETWEEN NOBLE & IGNOBLE STRAINS OF VANUATU KAVA?

There are many different species of kava grown on Vanuatu. Each have different combinations of kavalactones, the active ingredient in kava. The so-called ignoble strains of Vanuatu kava (known collectively as Tudei kava) can make you feel nauseous and dizzy and cause a nasty “kava hangover” – 2 days of lethargy, sleepiness and mental fog.

On the other hand, noble strains of Vanuatu kava elevate your mood and make you feel happy, their kavalactones are metabolised quickly and there’s no lasting effects.

So how do you tell the difference? Short answer is, you can’t…unless you happen to have some acetone handy (if mixed with kava, Tudei kava goes a darkish red, while Noble kava will display a light, golden colour).

Suffice to say that most kava consumed on a daily basis in Vanuatu is noble kava  and all kava exported from Vanuatu is from noble varieties. So before drinking Vanuatu kava make sure to ask what kind it is!

IS KAVA A DRUG OR AN ALCOHOLIC DRINK? 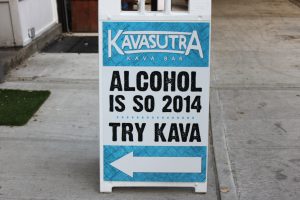 Kava is not brewed, fermented or distilled like alcohol, it is a drug made up of “lactones” (kava resins) extracted from the root of the plant. These lactones act on the central nervous system and have a calming effect on the body,  producing brain wave changes similar to drugs like Valium or Ketamine. Vanuatu kava relaxes your muscles, slows your heart rate and dilates your pupils. It is not addictive and does not affect your ability to think clearly. Kava is one of the few drugs that has a ‘reverse tolerance’ effect ie. the more regularly you drink kava, the less you need of it to feel its full effects.

HOW IS VANUATU KAVA PREPARED? 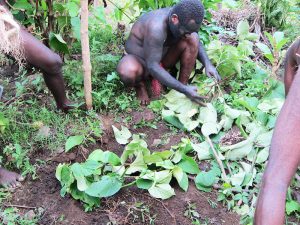 Traditionally, Vanuatu kava is prepared by cutting or pounding the root until it breaks into small pieces. The root is then chewed (preferably by children or beautiful young women because of their “purity”) and the juices spat into a bowl where it is mixed with a little coconut water or coconut milk. The chewing is meant to release the active ingredients of the root. The resulting brew is finally strained and squeezed through coconut fibre, diluted with clean water and served in half coconut shells to drink. These days, the kava root is often ground, pounded or grated rather than chewed and spat out, and the kava juice strained /decanted. For more information on traditional kava preparation and drinking Vanuatu kava click here .

There’s no getting around the fact that to the western palette, Vanuatu kava tastes a little like grass clippings mixed with dirt. It’s slightly bitter with a hint of pepper and has a strong “earthy” aftertaste that tends to leave your lips and tongue feeling tingly and numb. If you’re worried about the aftertaste, a good tip is to take a fruit chaser with you (a slice of fruit to suck on).

WHERE AND HOW DO YOU DRINK IT? 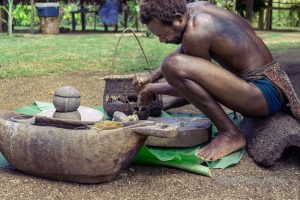 In a traditional village setting, Vanuatu kava is consumed in the nakamal, or central meeting hut, usually at night and usually by men only. However, in the many kava bars which have sprung up around Vanuatu towns in the last few years, both men and women are allowed to drink kava (same goes for the tourist villages). You can find a kava bar by looking for a red/green light outside the roadside huts or by asking locals/ex-pats where to go at the end of a working day.

Traditionally, kava is downed in one hit – you are expected to drain the shell! On many islands, this is followed by some enthusiastic spitting (it’s not as gross as you think). The spitting is a kind of symbolic “offering to the Gods” and is often accompanied by short prayers or whispered instructions to the ancestors (as a non-local you are not expected to do this).

Make sure not to eat anything 3-4 hours before having a kava drinking session as it can make you feel nauseous (it also dilutes the effect of the drug). For more information on how to purchase kava outside of Vanuatu check out the Australia Kava Shop website www.australiakavashop.com.au

HOW MUCH SHOULD YOU DRINK?

Vanuatu locals will often consume anywhere from 4-8 shells in a solid kava drinking session. We recommend you don’t drink more than 3-4 if you’re not used to the effects. 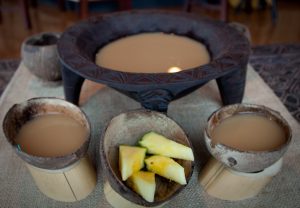 only have half a shell (especially if you explain the reasons why) but you’ll be accepted into their community more readily if you make the effort to be part of the kava drinking ceremony.

Having a beer chaser after kava is fine (but do not mix kava with strong alcohol), same goes for eating a snack in-between shells or afterwards, and if you do feel nauseous, a cup of warm milk or tea apparently acts as a good remedy!

Remember, whenever you’re drinking Vanuatu kava, make sure to have a break in between shells (10-15 mins) as there is often a delayed effect – one minute you are fine, the next you’re struggling to stand up or move!

Also keep in mind that you can sometimes experience the so-called “reverse tolerance” effect (see above for details) if you are having regular kava sessions.

WHAT ARE THE EFFECTS OF VANUATU KAVA?

There’s an old saying… “Alcohol makes you stupid, but kava makes you wise.”

Why? Because alcohol slows your thoughts, blurs perceptions and stupefies your brain. Good noble Vanuatu kava, by contrast, not only keeps your head clear (and heightens your hearing and vision) but at the same time relaxes your body and calms your nervous system.

Within a few minutes of drinking kava in vanuatu, you should notice a sense of calmness or contentment sweeping through your body! Your eyes will also become sensitive to light, so taking photos with a flash during a night time kava session is a no-no!

In a traditional village kava ceremony, the men will tell you kava allows them to connect with their ancestors and hear local spirits. That’s because, in the right setting, kava “drunkenness” causes a mild, altered state of consciousness that supposedly can “gift” you with knowledge and help you interpret your dreams! For more information we suggest you read  – Kava: The Pacific Elixir by Lamont Lindstrom, Mark Merlin, and Vincent Lebot.

On the flip side, drinking too much kava or the wrong type of kava (ie. Tudei kava) over an extended period of time can lead to a range of health problems, including malnutrition, weight loss, lethargy and (apparently) liver damage. In general, however, small quantities kava are considered very safe (you should be more concerned with the quality of water they mix with it rather than the kava itself!).

Kava has been used for centuries as a natural way to treat insomnia, depression and anxiety.  Unlike many prescription drugs, kava does not impair mental function or cause sleepiness and has few, if any, side effects. Pacific Islanders have also used kava as a kind of natural substitute for aspirin or as an anti-inflammatory herb.  Kava can treat ailments as diverse as heart trouble, urinary tract infections, pain relief for sore tired muscles, easing painful menstrual cramps,  rheumatism, asthma, toothaches and sore throats. For more information click here .

CNN News Anchor Bill Weir provides viewers with an up close and personal look at how kava is prepared and consumed in Vanuatu!