Vanuatu Birds and Where to Find Them

Vanuatu is home to some rare, amazing and beautiful birdlife, thanks to its diversity of habitats ranging from coastal swamps and lowland forests to incredible mountain cloud forests.

At last count there were around 178 different species of birds spotted in Vanuatu, of which 11 are found nowhere else in the world. But Vanuatu is no picnic for birdwatching. The birds are wary, often hard to see and don’t respond well to pishing or squeaking (birder hacks for attracting birds!). As well, their habitats are often hard to get to. In fact, locals and visitors alike often comment on the lack of birdlife in Vanuatu (which is ironic given their sheer diversity compared to other south Pacific Islands!).

So here’s our guide to birdwatching in Vanuatu, including the best places to find and spot Vanuatu birds, as well as some fascinating facts about Vanuatu’s strangest, rarest and most colourful bird life.

Where to Find Vanuatu Birds 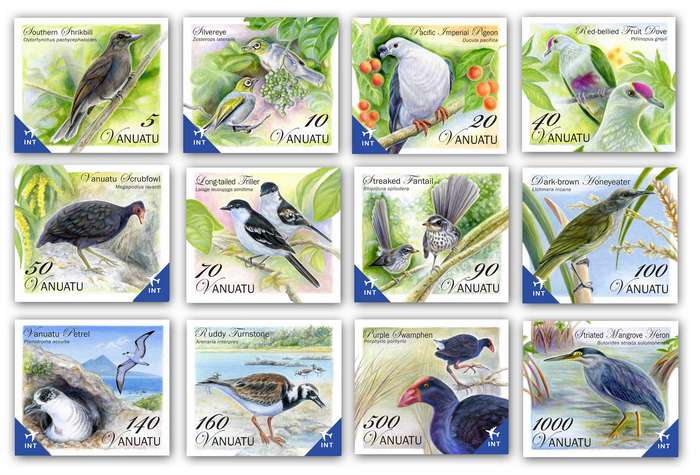 This 4100 ha site located in the Lelepa area (near Havanah Harbour on the northwest coast of Efate), incorporates a large swath of coastal lowland forests as well as the islands of Lelepa and Artok. It has been nominated for inscription on the World Heritage List. It is home to around 60 different species of land and sea birds.

This 26 hectare reserve located in Ambae’s cloud forest, near the summit of the volcano, has a good variety of montane bird species (25+ at last count). Although the actual reserve is small, there are also large expanses of untouched forest around Ambae’s summit as well, all harbouring lots of native wildlife. Compared to west Santo, Duviara’s cloud forests are relatively easy to access (the crater lakes in the summit caldera are also worth a visit) so its a great Vanuatu birdwatching destination.

The Loru Rainforest Protected Area, on the east coast of Santo, is not as big as the Vatthe Conservation Area (see below), but it is far more accessible. At 220 hectares, it’s a great spot for birdwatching and the local guides are very knowledgeable about the birdlife there.

The Vatthe Conservation Area is huge (almost 2,300 hectares) and consists of lowland alluvial rainforest, black volcanic sand beaches and steep limestone cliffs. Vanuatu’s largest river, the Jordan, runs through the middle of it. Apparently, around 80% of Vanuatu’s land and freshwater bird species have been recorded at Vatthe.

The Cloud Forests of Mt Tabewamasana

Located on the isolated west coast of Santo, Mt. Tabwemasana is not only the highest peak in Vanuatu but also one of the highest in the south Pacific (1875m). Surrounding the mountain are extensive tropical cloud forests and a staggering variety of ecosystems. Almost 30 different species of birds have been spotted just on the way up the mountain! It’s also home to the rare Santo Mountain Starling. A Vanuatu birdwatcher hot spot. See here for more

Consisting of more than 1000 hectares of lowland and hill forest and coastline on northwest Malekula, this protected area covers a diverse range of habitats – savannah, thickets, semi-deciduous forests and rainforests. The diverse range of habitats supports many different types of birds (more than 35 species have been recorded here). Best way to explore the area is to hire a birdwatching guide from the local village for the day.

This is a toss up between the chestnut bellied kingfisher, the coconut lorikeet (Nasiviru) and the royal parrotfinch. They’re all pretty amazing – which one is your favourite? 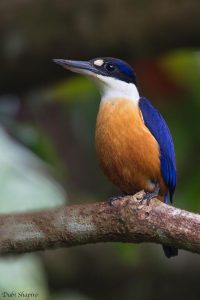 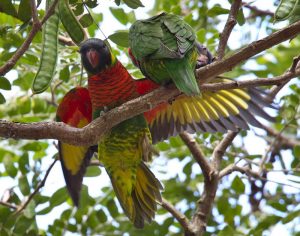 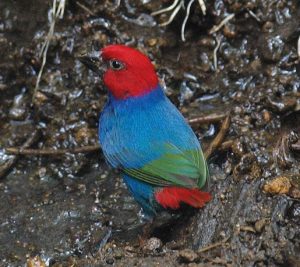 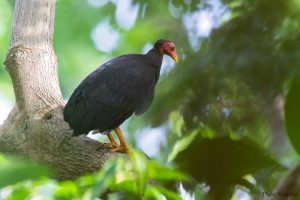 Without a doubt, the Vanuatu megapode (scrubfowl) is the weirdest bird living on the islands!  Unlike other birds it doesn’t sit on its eggs to hatch them. Instead, it either buries its eggs in burrows between decaying tree roots (where the breakdown of compost keeps the eggs warm), or in heated soils on the side of volcanoes (where geothermal energy does the job) or on sun-exposed beaches (utilising solar energy!). Even weirder, the females share their nest burrows with each other, some thing no other bird does (ie one nest may contain dozens of eggs, all from different females, all at different stages of development). Once hatched the babies have to dig themselves out of their burrows and fend for themselves (the parents effectively abandon them). 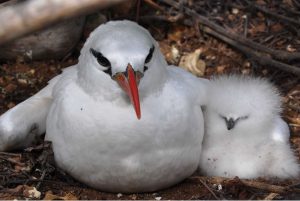 This would have to go to the Red-tailed Tropic Bird….no contest. Although not a native of Vanuatu, it nests on isolated islands like Paama and Laika. Its sleek, gull-shaped body has a delicate pink hue, its bill is a bright coral-red and it has two streamer-like red-tail feathers, giving it a stunningly beautiful appearance. It has an equally gorgeous cousin, the white-tailed tropic bird and its babies are incredibly adorable!

This title goes to the peregrine falcon. The Vanuatu subspecies (F.p nesiotes) , found mainly south of the Banks and Torres Islands, can reach speeds of up to 385 km/h when it swoops on its prey, making it not only the fastest bird in Vanuatu but also the fastest animal on the entire planet!

The Vanuatu petrel (seabird) leads an incredibly solitary life, roaming around the open seas of the south Pacific for months at a time. It feeds on the wing, scooping up small fish and squid, and only comes back to land to breed once a year. This occurs only on the steep volcanic slopes of Vanua Lava (in the Banks Islands) – they dig long tunnels under rocks and boulders to make nesting burrows!

It’s thought the last remaining populations of the Santa Cruz Ground Dove are located on Espiritu Santo. They’ve been spotted in the Vatthe Conservation Area at Big Bay and in and around the mountains of west Santo (its relative, the Tanna Ground Dove has already gone extinct). A close second is the Santo Mountain Starling which was thought to be extinct, but was rediscovered a few years ago living in the cloud forests of west Santo.

Leading the pack is the Nambiru or Purple Swamphen, which has a loud, explosive call – often described as a raucous high-pitched screech! Close behind it is the Vanuatu Imperial Pigeon (a native) which has a long, powerful and unmistakable cry – “How How How” –  followed by a kind of deep purring – Brrrrrr! They’re fruit eaters and usually found in the lowland rainforest. 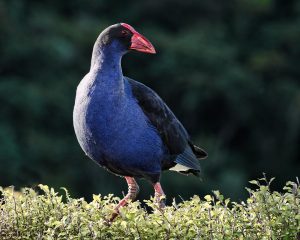 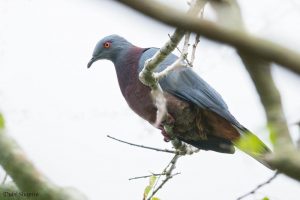 For more information on Vanuatu birds and Vanuatu birdwatching tours check out these websites – Okeanus , VESS, Birdquest Tours  or watch the American Museum of Natural History video below of their 2014 Vanuatu Birding Expedition