Anyone for a Vanuatu Ice-Cream? Bet You Can’t Guess the Flavour….

Give up? Well, technically it’s chocolate fruit flavour. I know, I know, it looks like good old-fashion vanilla right? But you’d be wrong on two counts. Firstly, because it’s not an ice-cream at all but the fruit of a cocoa pod! And secondly because even though the fruit tastes a little like lychee, the cocoa pods inside are actually used to make chocolate!

By now you’re probably wondering how they turn that luscious looking ice-cream cocoa fruit sundae into some of the best chocolate on earth. Or perhaps wondering how the hell cocoa trees ended up being grown in Vanuatu in the first place (considering their ancestral home is central America).

Let’s tackle the history first. Around the late 1800s, a wave of fervent missionaries and adventurous settlers arrived on the islands, looking for souls to convert and land on which to establish cotton plantations. The cotton plantations were an abject failure and when the cotton prices collapsed, the settlers and missionaries switched to producing coffee, cocoa, bananas and coconuts instead (which made the next wave of settlers – the French – very happy indeed!).

These days, there’s around 9000 cocoa growers scattered throughout the Vanuatu islands (many of them on Espiritu Santo and nearby Malekula) producing around 1500 tons of cocoa beans  a year worth an estimated $4.5 million AUD. It’s a big deal for Vanuatu even though they are only small fry in the chocolate market place. Sadly most local growers never get to taste the chocolate their cocoa beans are made from.

How Vanuatu Cocoa is Turned into Chocolate 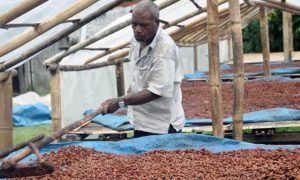 Enough with the history, let’s get down to the nitty gritty and find out how chocolate is actually made! Cocoa pods in Vanuatu are harvested from cocoa trees twice a year. The pods are split open with bush knives (machetes) and the white pulp containing the cocoa beans is scooped out. The beans are then fermented for up to five days, in boxes or under banana leaves and hessian bags, before being dried out in the sun for a further five days and bagged up for the factories (*Note – most of Vanuatu’s cocoa beans end up in Cadbury chocolate factories or in the hands of boutique Australian chocolate makers).

At the factories, the beans are roasted, the outer shell removed and the pure cocoa nibs ground into a paste using rollers and special conching machines. Sugar, milk powder and other flavourings are then added to the paste and the chocolate is “tempered” (by heating) until it forms tiny chocolate crystals! Finally, it is poured into moulds to set and ta-dah – a Vanuatu-flavoured chocolate bar is born!

*Note – the best place to check out how cocoa is grown on Espiritu Santo is to visit Freshwater Plantation on Aore Island. And if you want to purchase chocolate made in Vanuatu you can’t go past Aelan Chocolates.