Believe it or not, flying foxes (or fruit bats as they are more commonly known) are Vanuatu’s only native land mammal – everything else has been introduced by humans! There are actually five different types of Vanuatu flying foxes, including one named after a vampire, one with a monkey-like tail and one with a wing span nearly 2m wide! They’re incredibly important to life on the islands – without them many of the local fruit trees and rainforest trees would not survive or produce fruit because they act as natural pollinators (think of them as giant bees!).  Want to know more?

Check out our Top 10 fascinating facts about Vanuatu flying foxes….

Largest Bat in the World? 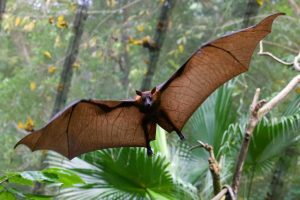 The Vanuatu giant flying fox (Pteropus vampyrus) can have a wingspan almost 2m wide! That makes it the largest in the world. Its scientific name means “vampire” but it doesn’t suck blood, just the nectar and juices from flowers and fruits! And it’s not related to a fox (it just looks like one thanks to its seal brown body and orange head). In terms of Vanuatu native wildlife, this megabat is king! Read the beautiful kastom story of how Vanuatu flying foxes got their wings here. 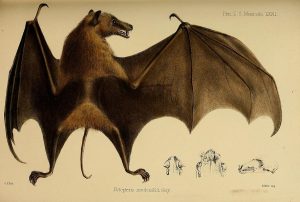 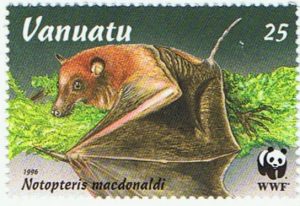 The Vanuatu Long-Tailed Fruit Bat (also known as the Fiji Blossom Bat – Notopteris macdonaldii) is a bizarre looking bat with a strange monkey-like tail and a dog-shaped face. It’s quite small compared to other Vanuatu flying foxes (about 10cm long) but is an excellent flyer thanks to its tail “stabiliser”. It’s known as a “primitive” flying fox (ie in that it resembles fossil bats more than 30 million years old). They mainly roost in caves in large colonies and are only found on a few islands in Fiji and Vanuatu. A strange Vanuatu animal indeed!

The locals of Mota and Vanua Lava islands, in the Banks group, call the Banks Flying Fox (Pteropus fundatus) “smol waet flying foxes” because of their cute white faces. They are only found in 5 locations on the islands and are an extremely endangered Vanuatu wildlife species. Like all flying foxes they can’t echolocate – they rely on their excellent eyesight and smell to track down their favourite food (fruit, nectar, blossoms, and pollen).

When other food sources are scarce, fruit bats and other Vanuatu native animals provide a much needed source of protein for local Vanuatu villagers. In fact one South Australian man, who found himself stranded on Tanna island after Cyclone Pam, survived by eating fruit bats and birds with the other villagers (read his incredible story here). If you don’t want to hunt and cook your own fruit bat, there’s a French restaurant in Port Vila called L’Houstalet famous for serving flying fox civet (bat marinated in red wine sauce). Apparently, the meat is dark and gamey (with a slightly fruity aftertaste) and full of bones (Mmmm!). Not like chicken at all really…. 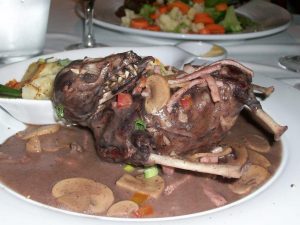 Vanuatu flying foxes can’t control their flight like a bird can – in fact most times when they land in a tree, they kind of crash land into the branches, grasping for a foothold before they fall (their toes have large hooked claws just for this prupose). Once attached, they hang upside down and use one of their hind feet to pass food down to their mouth (or they use their clawed thumbs at the top of their wings!). Talk about batty Vanuatu wildlife!. 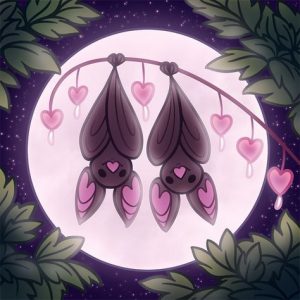 Vanuatu flying foxes have incredible sex lives. Male fruit bats often service a harem of up to 10 females and have one of the longest penises in the animal kingdom (in comparison to its body size) – up to one quarter the length of its body! Most species have sex all year round but in mating season bats have sex multiple times a day (with extended periods of foreplay). This involves some serious upside-down gymnastics and a great deal of arduous licking! A bizarre Vanuatu animal with a sex life to match.

Vanuatu flying foxes, especially the waet flying fox (P. anetianus), hang out in tree canopies in large numbers and love chatting to each other. In fact, they have at least 30 different calls they use for communication! 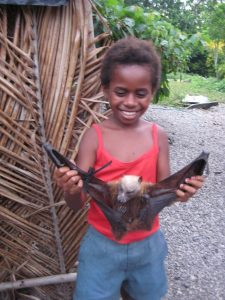 Walk near any Vanuatu flying fox colony and you’ll probably smell them before you see them. Why? Because the males secrete their own bat perfume designed to attract females and stake out their territorial claims.

Many Vanuatu flying foxes live to the ripe old age of 20-30 years in the wild and have incredible memories. Not only do they use roads, rivers and other features as navigational aids but they also remember where their favourite fruit trees are located and when they produce fruit.

The Insular flying fox (or Pacific Flying Fox P. tonganus), is found throughout the south Pacific and, like most flying foxes, has well developed night vision. This is due to their unique “mirror-like retinas” that capture and focus even the smallest amount of light. They can fly up to 50km a night in search of food and can help disperse the seeds or pollen of up to 30 different rainforest/fruit trees. It’s a Vanuatu mammal vital to the health of the entire eco-system. 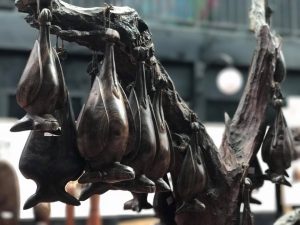