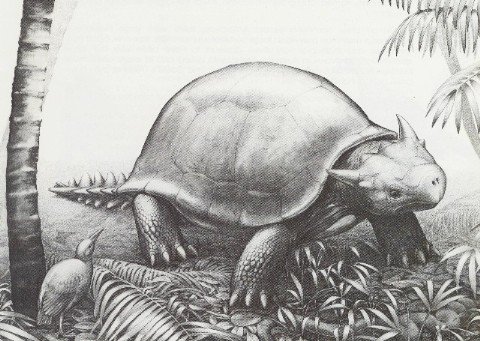 When the first settlers arrived in Vanuatu over 3,000 years ago they were greeted with an amazing sight – thousands upon thousands of giant horned land turtles complete with armoured club-like tails lumbering around the islands like miniature battle tanks. Scientists estimate there may have been tens of thousands of these strange creatures living on the islands, each weighing up to 500kg and measuring up to one and half metres (5ft) wide.

For the early settlers (the so-called Lapita people), the slow-moving Vanuatu giant turtles turned out to be the ultimate takeaway food and their fearsome armour, horns and spiked tails were no match for modern spears and knives. The Lapita (the ancestors of the early Polynesians) set about eating their way through the resident population – helped, no doubt by the pigs and rats they brought with them, which ate the turtle’s eggs.

Little did they realise they had just stumbled across the last turtles of their kind left in the entire world, an ancient lineage known as the meiolaniids (horned turtles), which were thought to have gone extinct over 50,000 years earlier! 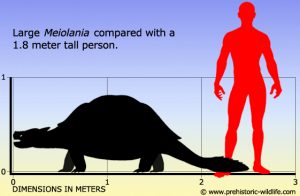 and were once widespread throughout Australia and the south Pacific islands. The largest of them weighed over a ton and measured over 2.5m long!

In other words, the Lapita people had discovered a real life version of the movie “Jurassic Park” and these Vanuatu giant turtles were its resident dinosaurs! They were also the closest thing to a living, breathing version of the famous Teenage Mutant Ninja Turtles! In fact, one species of the turtle is even named Ninjemys, in honour of the comic book superheros.

Sadly, it took less than 200 years for all the Vanuatu giant turtles to be hunted and eaten to extinction. How do we know this? Scientists who uncovered an ancient Lapita midden site and cemetery on Efate Island found literally dozens of giant turtle bones in sediment 3000 years old but none at all in sediment 2800 years old.