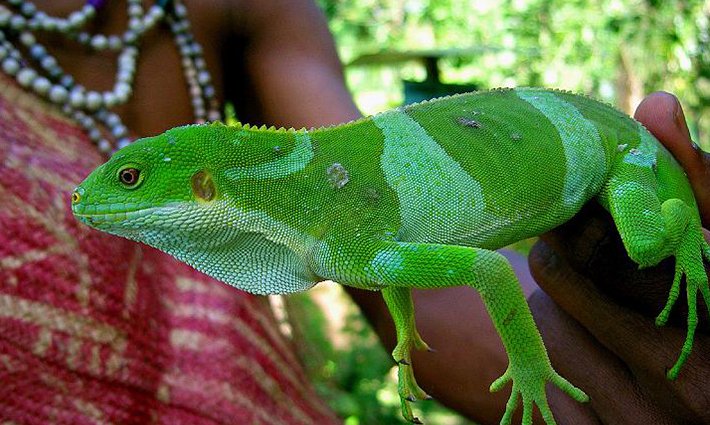 So, you’ve just arrived in Efate or maybe Espiritu Santo – you’re handed a stunning, emerald-green lizard to take a photo with. You’re told it’s a rare banded Vanuatu iguana, whose ancestors floated to the south Pacific islands on mats of debris hundreds of years ago (an epic journey from South America of some 9,000 kms!) and that they feature on Vanuatu’s national stamp collection. True or False?

They are NOT a Vanuatu native animal BUT amazingly, everything else in the above description is TRUE! You see, the real story of how the banded iguana arrived in Vanuatu and became part of the local wildlife is actually shrouded in legends and secrecy.

Banded iguanas are native to the Fiji islands, not Vanuatu. As stated previously they floated there on rafts of debris thousands of years ago. The Fijian name for the iguana is “vokai”, although some tribes call it “saumuri”. Many tribes regard the iguana as their totem and its name is not allowed to be mentioned in the presence of women otherwise the offender may be beaten with a stick! These days, the majority of Fijians consider the banded iguana as a national treasure. So how did this rare and endangered species make it across the ocean to Vanuatu, some 1200km away?

Well, it seems that in the late 1950s (or early 1960s) an enterprising zoo-owner from Vanuatu managed to convince some Fijian locals to round up and capture a couple of the treasured iguanas. He then whisked the animals back to Efate Island (with or without the permission of the local Fijian authorities – no one seems to know for sure) and began displaying them in his zoo in Port Vila. When the zoo went bankrupt and closed down a few years later, the banded iguanas were released into the wild, and the mythical Vanuatu iguana was born! So although they are touted as a Vanuatu native animal, they are definitely a lizard imposter.

*Note – the best place to see a Vanuatu banded iguana is at the Secret Garden just outside Port Vila on the island of Efate (main image courtesy of Secret Garden).

So here’s 6 amazing facts about the Vanuatu Iguana that you always wanted to know but were too afraid to ask….