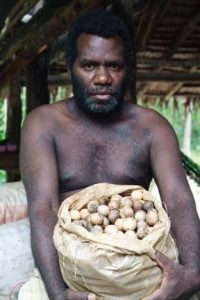 For hundreds of years, the people of the South Pacific have been using tamanu oil to heal their wounds, melt away scar tissue and fight skin infections. It is one of the most powerful of the 5 Vanuatu miracle oils we describe in this blog and is derived from the green, macadamia-sized nuts of the magnificent tamanu tree (Calophyllum inophyllum). The tree grows wild throughout Vanuatu (in fact there is a massive tamanu tree growing at the front of  Turtle Bay Beach House!). The oil has an intense yellow-green colour and is characterised by a distinctive scent – it is often called “the nurse of the South Pacific”. In addition to 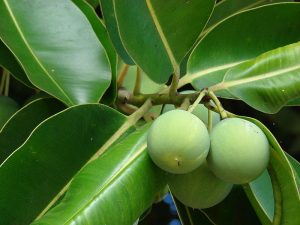 its anti-ageing qualities, tamanu oil can be used as a treatment for eczema, psoriasis, dermatitis, acne, burns, scarring, ulcers, skin infections, cold sores, tinea, arthritic pain, nappy rash and sun damaged skin (to name but a few!). It is available from local suppliers like Volcanic Earth , The Summit , Tamanu Oil Australia and Nabakura Tamanu  as well as most shops. 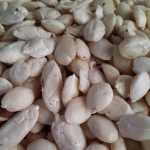 Nangai oil is made from the pale, almond shaped nut of the Nangai tree (Canarium indicum) – in fact some call it the Vanuatu almond! Not only are nangai nuts delicious and healthy to eat (they taste like a cross between a cashew and a macadamia) but the oil has been used for centuries to sooth joint and muscle pain, moisturise and repair dry skin and improve th 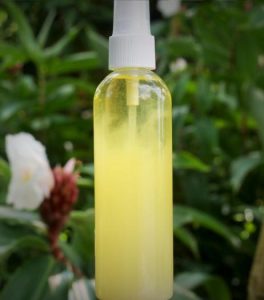 e manageability and appearance of hair! It is truly one of the most versatile of the 5 Vanuatu miracle oils. The tree itself plays an important role in traditional kastom life – there are many stories, songs and custom dances based around it throughout the Vanuatu Islands.

Nangai oil is transparent and exudes a mild, nutty aroma. It’s incredibly rich in triglycerides like stearic, palmitic, oleic and linoleic fatty acids, giving it some amazing properties –the oil is anti-bacterial, anti-inflammatory and has excellent moisturising qualities. Local producers include Kava King , The Summit and many more. It can be found in most market, supermarkets and handicraft shops throughout Vanuatu.

The so-called “miracle” noni plant (Morinda citrifolia) has been used by South Pacific Islanders and Polynesians as a source of medicine for over 2,000 years. Virtually every part of the plant has some medicinal use – the fruit (which tastes and smells a little like blue cheese) was fermented in jars and the juice drunk daily as a cure-all to prevent disease and to enhance overall vitality and well-being. The leaves and seeds were crushed for their oil and used in poultices to treat deep wounds, rheumatic pain, inflammation, ulcers and boils. It was also inhaled to provide relief for colds and coughs. For an excellent summary of the Noni tree and its medicinal uses click here .

Scientific research has since found noni juice to be effective at stabilising blood sugar for diabetes and noni oil to be excellent for treating inflammatory skin conditions and rheumatism. Some other uses of the oil include treatment of skin irritations and rashes, insect bites and stings, minor cuts and burns, whitespot, ringworm and dandruff control. It’s one of the more useful Vanuatu miracle oils.

Noni trees can be found on the island of Espiritu Santo and there is currently a large noni plantation being established at Velit Bay. Local suppliers include Kava King  , Pure Tamanau  and Organic Paradise . 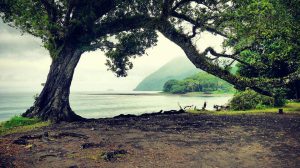 Vanuatu native  sandalwood trees (Santalum austrocaledonicum) are highly valued for their fragrant heartwood oils. They grow naturally throughout most of the Vanuatu islands, in particular Erromango Island.

According to Vanuatu kastom stories there are two types of sandalwood trees – a “man” variety and a” woman” variety (the woman variety produces good heartwood early while the man tree needs to be pruned to induce good heartwood).

Sandalwood has been used by South Pacific people as an insect repellent, to calm nerves and release stress, as a scent for the hair and the body, for carvings and purification rituals and to cure head lice and dandruff. 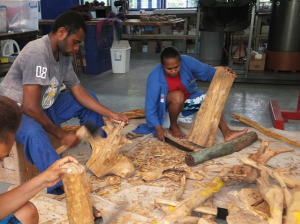 Vanuatu sandalwood oil is rich in alpha and beta santalols which is what gives the oil such a beautiful aroma. It is commonly used in many natural healing skin care products because it contains antibacterial, antioxidant, anti-inflammatory, antiseptic and anti-spasmodic properties. The fragrance of sandalwood is also supposed to calm the worried mind, centre the heart, enhance concentration and create a serene state of consciousness. In terms of Vanuatu miracle oils, this has the most powerful and healing scent.

Local producers include The Summit , Tamanu Australia , Floracopeia  and it can be found in specialist stores in Port Vila. 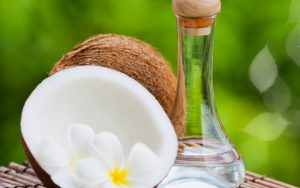 Coconut oil was once demonised as being high in fatty acids and therefore bad for cholesterol, diet and heart disease. But research has since found the fats to be mostly medium chain fatty acids which are absorbed directly by the liver, providing instant energy (in comparison to say, butter which contains long-chain fatty acids that are deposited directly in the fat cells).

In fact, over half of the fat found in coconut oil is in the form of lauric acid, whose by-products are thought to have antiviral, antifungal and antibacterial properties (interestingly, the only other source of high levels of lauric acid is breast milk!). 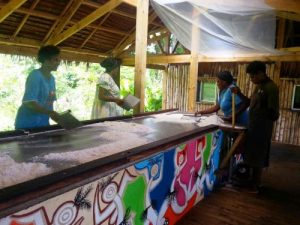 Both Melanesians and Polynesian islanders call the coconut tree “the tree of life” and for good reason. They have been using coconut oil to treat a variety of ailments over the centuries – to ease stiff joints, to treat rheumatism and back pain, to heal minor wounds, as a moisturiser to maintain smooth, soft skin, as a cure all for stomach and digestive ailments and (mixed with turmeric) to treat sick newborn infants.

There is now ample scientific evidence that coconut oil assists with proper digestion and metabolism, weight loss, destroys candida infections, corrects thyroid function, normalises cholesterol levels and increases immunity. It is truly a miracle oil! Local suppliers include Volcanic Earth , Tanna Farms , The Summit  and COPSL on Espiritu Santo (wholesale only). It can be found in most shops and supermarkets throughout Vanuatu.