Weird & Wonderful Vanuatu Fruits You Just Have to Try!

If you thought Asia was the only place on the planet with weird, exotic tropical fruits, think again. Vanuatu’s food markets and village stalls are bursting with wonderfully strange island fruits that can turn your holiday into a culinary adventure in paradise.

Some are just unusual variations on the fruits we know and love (like the red dessert bananas), while others, like the Naus fruit or the Soursop, defy conventional taste descriptions. All you need to do is step outside your “food” comfort zone to experience them! So without further ado, here’s our local’s guide to the Top 10 weirdest and tastiest Vanuatu fruits you just have to try. 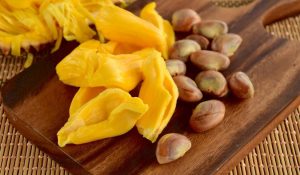 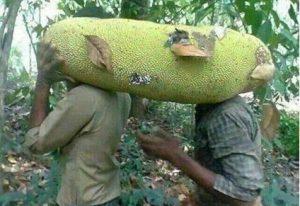 Jackfruits are amazing, and not just because they taste remarkably like juicy fruit chewing gum. They are the largest tree-grown fruits in the world and can vary in size from 3kg to up to 30kg, Oblong in shape, with a rough green skin, they are characterised by a distinctive musky smell. Most of the time the firm, yellow flesh is separated from the seeds and sold in bags in Vanuatu food markets ready to snack on or cook.

Local Ni-vans say mixing ripe jackfruit with lime and coconut is a killer combination while vegans swear young green jackfruit is the ultimate substitute for pulled pork (!) when cooked and seasoned. Jackfruit seeds can also be boiled and roasted and made into yummy, creamy roasted nut snacks, as well as dips and pestos. 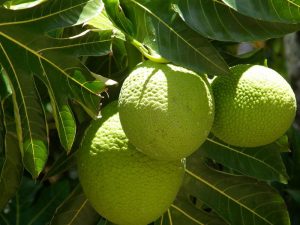 Breadfruits aren’t really “fruity” at all but they’re a staple food in Vanuatu because they’re so versatile – they can be roasted, baked, fried or boiled. Incredibly, they taste very similar to freshly baked bread,hence their name! Breadfruits are related to jackfruits (both are originally from New Guinea), but they have been cultivated in Vanuatu for so long that there are now dozens of local varieties. They look like large green volleyballs and have a rough skin. The flesh inside is white and spongey!

A local favourite! Some say it tastes like a combination of apple, pear and ginger, others like a slightly sour/zingy pineapple-mango. Either way, naus is one of the Vanuatu fruits you just 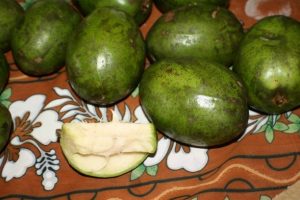 have to try! In terms of size and shape, it resembles a small unripe avocado with its smooth green skin and crunchy, hard flesh, but it’s better eaten raw after it ripens a little (it goes a golden yellow colour).

The sweetest part of the fruit is nearest the seed. Naus fruit is awesome grated in coleslaw and salads. When cooked it can be used to make delicious jelly, pickles, relishes and curries. The juice from the blended and strained fruit can also be made into sorbet or mixed with other tropical fruit juices to enhance their flavour, aroma and taste. 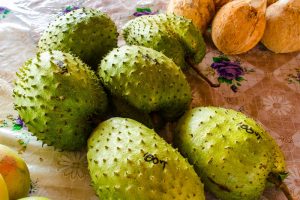 Soursop is a Vanuatu fruit that is beyond strange. Originally from Central America, it was spread to Vanuatu by European missionaries in the 1800s. The flavour of the fruit has been described as a combination of “strawberry and pineapple, with sour citrus flavour notes contrasting with an underlying creamy texture reminiscent of coconut or banana”. Wow!

It’s normally about the size of a rockmelon (but can grow up to 5kgs) and looks to all the world like a giant green peanut covered in soft spines. When ripe it’s soft to the touch. You can eat the fruit raw, blend it with Bacardi for daquiris or use it to make delicious ice-creams, jellies and sorbets. You can even mix it into cheesecakes for a unique tropical flavour.

There’s also a smaller, sweeter version of the soursop known as the “bullock’s heart” or sweetsop. In Australia we call them custard apples because they taste a little like sweet custard mixed with stewed pears or apples. Like their larger soursop cousins, sweetsops make great sorbets and are delicious in fruit salads, ice-creams and drinks.

Pomelos are the weird and wonderful ancestors of grapefruit. They can grow huge (sometimes as big as a volleyball) and are either round or pear-shaped with thick, spongey rinds. But take the time to carve your way through the massive amounts of white fibrous “pith” inside and the fruit is a 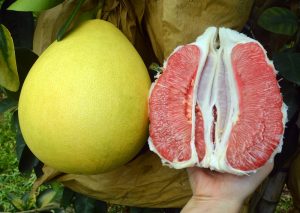 revelation – sweet, succulent crescents of  juicy loveliness (lacking the tartness and acidity of their grapefruit cousins).

Pomelos are immensely popular all over Vanuatu and come in two varieties – pink and white. They are great in fruit salads as well as in seafood salads and the rind makes an amazing marmalade. Although originally a native of Indonesia, these Vanuatu fruits probably arrived in the islands with the first missionaries at the end of the 19th Century.

Ok so strictly speaking this is not a fruit, it’s the precursor to one. The elongated tear-shaped (maroon) blossoms hang at the end of each fruiting stem of a banana tree (bananas are technically its berries). Hidden inside the blossom is a yellow- 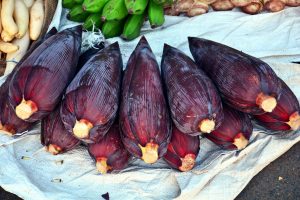 green heart, which can be eaten raw or cooked.

The hearts taste and smell lightly of banana, its a very delicate flavour (think zucchini blossoms vs full-grown zucchinis). The heart can be simply chopped up and used in salads, added to soups or sliced and added to stir-fries. In short, you can use banana flowers the same way you use any other savuory greens! 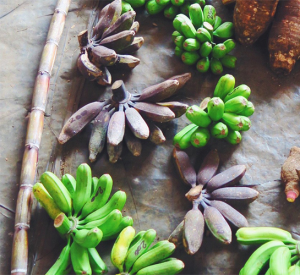 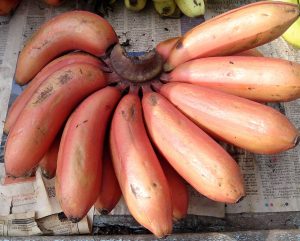 In Vanuatu bananas can be both a fruit and a vegetable! There’s supposed to be 17 different varieties on the islands, ranging from ladyfingers to purple plantains to the unusual Fe’i bananas with their orange-yellow flesh. So why stick to the garden variety yellow bananas we eat every day when you can try something new and exciting?

We recommend trying plantain bananas. Plantains are usually thicker and fatter than regular sweet bananas and can be eaten green or ripe. If green you need to treat them as a savoury, starchy vegetable – grill them, bake them or deep fry them.

Ni-Vanuatu love to grate their green plantain bananas to a pulp and then mix them with coconut milk before steaming them in banana leaves. The taste of cooked plantains is vaguely like a banana-flavoured potato.

Red dessert bananas are another taste sensation in Vanuatu that are definitely worth a try. They are shorter, plumper and heartier than the average banana. Eaten ripe they taste sweet and creamy with raspberry highlights. But when baked or grilled/fried they are a caramelised delight and can be used for both desserts and semi-savoury dishes.

When is a lychee not a lychee? When it’s a Pacific Lychee!

Although related, the fruit looks completely different to a regular lychee – they have a hard, smooth outer shell that can be green, red, or purple in colour, depending on the variety.

Inside, they’re very similar to a normal lychee, with a translucent, soft flesh and a lychee-like aroma. As for the taste, well, they’re not as sweet as a regular lychee, but they’re pretty damn good (kind of like a cross between a lychee and a durian). As one of the unique Vanuatu fruits, they are definitely worth trying! These clusters of cherry sized fruits turn yellow or orange when ripe and have a very pulpy, acid-tasting flesh when eaten raw – almost like a tart plum. There’s a large brown seed in the centre of them.

Rose Apples or Ningauvung  fruit as the locals call them, have been growing in Vanuatu for hundreds of years. They are related to guavas and are known in Australia as ribery or Lilly Pilly fruit. Over 18 different tree varieties can be found 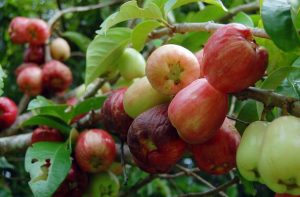 scattered around the islands and their fruits range from egg-shaped with smooth, thin, waxy, pale yellow skin (with some pink flushes) to more pear or bell-shaped fruits with a pink or reddish skin. They range in size from 2cm to 5cm.

The white flesh inside is crisp, faintly sweet and fragrant and can either have a faint rosewater taste or be tart and cranberry-like with a hint of cloves. Rose Apples can be eaten raw, or they can be cooked with other fruits to add some flavour (Note: the seeds are toxic and must be discarded!).

These amazing little Vanuatu fruits can be made into preserves, syrups and sauces. Villagers often flavour their food with the sweet blossom of the Rose Apple tree – they call it the kae kae flaoa (food flower).